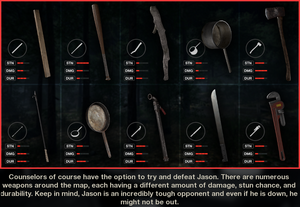 Weapons can be found in Friday the 13th: The Game.

During a match, weapons are randomly scattered throughout the levels (with the exception of the shotgun, whose placements are fixed depending on the map when excluding those found randomly near fireplaces).

Counselors will not start matches equipped with a weapon unless they use the Slugger Perk. Jason, on the flip side, always starts off armed.

For counselors, there are three main stats each weapon has when determining their fighting potential:

All counselor weapons, except the Axe and Baseball Bat, swing at the same rate unless equipped with the Swift Attacker perk.

Some items can be used to attack Jason, and can be found in various places.

Jason's weapons will not break, and he deals a fixed amount of damage. He also has a faster attack speed than counselors, and can grab them quickly as well. As a hidden bonus, Part 6 Jason as well as Savini Jason wield weapons with a longer reach than the other choices.