Vanessa Jones is one of the Counselors in Friday the 13th: The Game, and is nicknamed "The Athletic Girl".[1] She is one of five counselors already unlocked in the beginning of the game, the others being Chad Kensington, Jenny Myers, Kenny Riedell, and Sheldon "Shelly" Finkelstein.

"Vanessa is the rabbit in the game making her hard to catch by Jason and with her decent luck and strength, she becomes a pesky mosquito that Jason has to deal with. Vanessa is a perfect distraction for Jason with her stealth being terrible since she has elephant feet, but with her stamina and speed on point. She is, therefore, well suited to be a decoy."

Vanessa Jones is not only the fastest counselor in the game, she's also capable of maintaining her speed for a long time, thanks to her high stamina. As such, she is a good choice for serving as a decoy to lead Jason away from the rest of her team. The irony is that she has to run solo to fulfill her role sometimes, despite being a team-oriented counselor.

Once Vanessa finds a group of counselors, she has two roles: a speedy part runner, or a noisy decoy. Her primary role should be acting as a decoy in order to get Jason's attention away from everyone else. Jason might hunt her down if he cannot find other counselors, and with Vanessa's low stealth it's easy for her to draw aggro. This isn't always the case if Jason is more worried about guarding objectives, but if he gets impatient, then he will start hunting down the people he can first track, and Vanessa's low stealth is perfect for getting his attention.

As an alternative, she can serve as an effective part runner, making deliveries while more capable repair counselors fix an objective. However, if she chooses this role, there's a chance she will reveal to Jason an objective of interest where people might be camping nearby. Her group must be ready to fight Jason and run from him should he discover the objective Vanessa is gathering parts for. Once Jason knows the team's plan, he will oftentimes ignore Vanessa, choosing instead to hunt down the slower teammates who are near the chosen objective.

Inexperienced Vanessa players will create several problems for their team. For starters, hanging out with counselors who specialize in high-stealth gameplay will be problematic since Vanessa makes a great deal of noise as she moves. Many players also tend to overestimate her ability to escape Jason; he does, after all, possess two teleportation abilities (Morph and Shift). She may be able to outrun him, but skilled Jason players will know how to outsmart her, so make sure to have a backup plan ready just in case Jason manages to cut off your escape route.

Keep in mind that it won't take long for Vanessa to panic due to her low composure, so do your best to keep her fear as low as possible since high levels of fear will hurt your stamina regeneration as well as increase your chances to stumble. Stay near cabins if possible, and look for ones you can duck into for safety when Jason discovers you. It's better to stall for time by forcing Jason to break into a locked building rather than exhausting yourself out in the open. Do not hesitate to turn on the flashlight in order to help deal with the dark, and use hiding spots to recover stamina faster while reducing fear.

When choosing Vanessa, make a mental note of any teammates who selected the counselor Brandon; these two work together in tandem very well. Both of them are fast, and they make a lot of noise to attract attention which makes them suitable partners. In this case, Vanessa should act as a part runner whereas Brandon should escort her as a bodyguard; this duo can make life difficult for Jason to prevent an objective from receiving the parts it needs. Working alongside another Vanessa player isn't a bad choice either since she can put up a decent fight with her strength and luck stats reaching a middle ground.

When arming yourself, use weapons with high-stun potential as well as firearms if you find them. Keep in mind that while acting as a part runner, she will be unarmed at these times; pocket knives are an essential since her low composure and strength will make it difficult to free yourself from Jason's clutches. You can also use fire crackers to stun Jason while holding a part, albeit this requires careful aim.

Keep your wits about you and don't run with reckless abandon. Jason has more than enough tools to catch you but if you plan ahead of time, you can frustrate him to no end.

Outside the Virtual Cabin, she is swimming at the end of the dock wearing her Spring Break '84 DLC swimsuit. After Jason is resurrected, Vanessa's corpse is found floating in the water next to Mitch with a harpoon in her back.

Vanessa represents the "Athletic Girl" trope, even wearing a jogging outfit to boot. She is noticeably fit with a toned body shape, and has tied her black hair into a ponytail, all of which is characteristic of an experienced athlete who specializes in cardio exercises.

She has additional clothing packs unlocked from purchasing Downloadable Content. 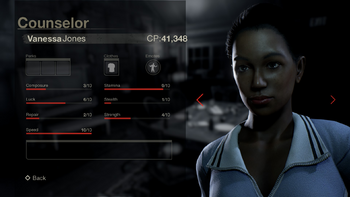 The stats for Vanessa Jones.