Tiffany Cox is one of the Counselors in Friday the 13th: The Game, and is nicknamed "The Flirty Girl".[1] She can be unlocked at Level 18.

A veritable bundle of energy, Tiffany is good at sneaking around with a high Stealth stat, and is light enough to run for a long time with good Stamina. She tends to freak out more easily and, in general, has less in the way of Composure. She's a pretty versatile character but isn't well suited for repairing tasks like fixing cars or getting power turned back on in cabins.[1]

Tiffany is a counselor who rewards careful gameplay. She can be difficult for inexperienced players to use at first, but she possesses a rare mixture between stealth as well as overall athleticism which isn't seen with other counselors.

Due to her maxed stealth, Tiffany will not make noise while jogging. The only way she'll ever be spotted via noise is if she sprints, moves through water, attempts to move while out of stamina, or Jason happens to find her using his Sense ability, all of which is still a tall order for him to deal with (at least until his Sense detection radius grows larger). And while her speed isn't quite at the levels of Vanessa, Chad, or Buggzy, she's still faster than the average counselor. Last of all, thanks to her high stamina, she can jog for a very long time without attracting Jason's attention.

However, Tiffany's maxed stealth can also be a double-edged sword at times. She is inadequate at making noise, so she won't be able to get Jason's attention with ease if you wanted to draw aggro away from your teammates; you are sacrificing the ability to get his attention in order to accomplish a great deal of work behind the scenes. And due to her low composure as well as luck, she can turn into a panicking mess who stumbles on a regular basis if she doesn't get a handle on her fear.

At the same time, Tiffany isn't an ideal fighter due to her low strength, and not controlling her fear will create more problems if she has to fight Jason. But her skillset does make her very good at roaming around the map while not making noise, so this isn't a problem if you're careful to avoid areas of high interest (e.g. areas filled with counselors who have low stealth).

Tiffany's main goal is to deliver parts she finds to their corresponding locations; this is due to her high athleticism as well as terrible repair stat which makes her inadequate for fixing objectives herself. But unlike other speed runners, her role is to push the objective which is least guarded by Jason. Since he will want to prevent as many counselors from escaping as possible, his normal routine is to lock down the four-seater car as well as the phone box; this means Tiffany should focus on the lesser objective in a match to avoid Jason's wrath while using her stealth to avoid attention. The typical objective she should focus on in a match includes the boat and the two-seater car (depending on which one spawns on the map).

Thanks to her athleticism, Tiffany is an ideal female counselor to wear Pamela's sweater; she can bolt away while standing a decent chance of staying away from Jason. And if done early in the match, Jason might not be able to Sense her if he cannot Morph immediately to the Shack since Tiffany might've gained a considerable amount of distance away. With maxed stealth, it becomes difficult for Jason to locate her, and this puts even more pressure on Jason since he will be forced to wait until later stages in the game in order to potentially find her using Sense (so long as Tiffany stays away from major objectives as well as counselors who make a lot of noise).

For weapons, Tiffany should focus on choices with high-stun potential as well as high durability, like the wrench. Otherwise, firearms are a great universal pick, and due to her stealth, it may even be possible to get the jump on Jason if he threatens your teammates. However, fighting him should be a last resort. Let other teammates deal with him; you should focus your attention on helping the team escape via repaired objectives.

Steer clear of Jason and deliver parts while his attention is focused elsewhere. If you're quick enough, he will never know you were even there.

In the Virtual Cabin game mode, Tiffany as well as Kenny are both found in a first floor bedroom cuddling on a hammock; they are wearing their Spring Break '84 DLC clothing. After Jason breaks out of his display case, Tiffany's corpse is found on the hammock with an arrow through her chest.

She wears a loose fitting blouse which hangs off her shoulder, denim shorts and sneakers, as well as a silver ring.

Her Spring Break '84 outfit is a yellow bikini with pink patterns.

Her Halloween costume is a "naughty devil", even including red horns. 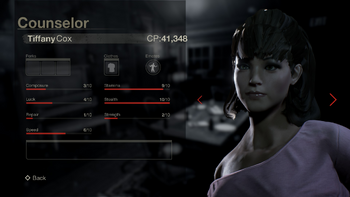 The stats for Tiffany Cox.