Jenny Myers is one of the Counselors in Friday the 13th: The Game, and is nicknamed "The Girl Next Door".[1] She is one of the five counselors already unlocked in the beginning of the game, the others being Chad Kensington, Kenny Riedell, Vanessa Jones, and Sheldon "Shelly" Finkelstein.

Jenny is a counselor many new players will have trouble figuring out at first. Her composure as well as luck stand out as her main selling points, whereas her athleticism (speed/stamina) is somewhat lacking. Her low strength makes her seem like a weak fighter, and her repair stat makes her an unreliable fixer. As a result, many people are oftentimes confused as to what role she fulfills on the team.

At heart, she is one of the best protectors in the game, whether attracting Jason's attention away from her team or fighting him off to buy the others more time to accomplish a goal. The secret lies in her bravery as well as the many bonuses her luck gives her under the radar.

First, one must understand the dual nature of the composure stat. She isn't frightened easily which helps her keep a level head even when Jason is around. But due to how composure works, when her fear levels become too high, it takes longer for Jenny to regain her bravery compared to counselors with weak composure. Still, it can take several minutes before she reaches maximum fear levels (unless you are exposed to high amounts of fear-inducing elements which speeds up the process), something which will help her remain calm; this helps keep her in prime shape stamina-wise when squaring off against Jason, or in other words, it takes a long time before she succumbs to the stamina-regeneration penalties which occur at high levels of fear.

Having high-fear resistance plus high luck also helps her stave off the stumbling penalty. Since it takes a long time for her to panic, she will not stumble often (most noticeably when trying to hit Jason with a weapon for a stamina boost), all of which can make or break her in a fight. In fact, she is the least-likely counselor in the game to stumble, beaten only by Tommy Jarvis in that regard (who, technically, isn't a counselor).

Jenny's high luck also increases the amount of times she can strike Jason with weapons before they break. This is very useful when she is wielding a baseball bat, her signature weapon due to its high-stun potential, mitigated only by its low durability. This means she can utilize its high-stun potential to get stamina boosts frequently, something not many counselors can do.

Unusually, Jenny's low strength can be ignored using certain weapons. Since using combat stance will double the amount of damage dealt with melee weapons, her ability to rip Jason's mask off in a fight isn't too bad (it takes roughly four vertical power swings in combat stance mode with a machete or axe to demask Jason). Of course this depends on using combat stance, but her high luck makes her a solid candidate for using an axe to fight Jason off. While dealing damage to him isn't ideal if your team isn't focusing on trying to kill him, it does help buy you more time to escape if you can cause him to fall over in pain or stun him, and the high-stun chance makes it a decent replacement for a baseball bat, especially if you value melee weapons with a long reach.

Her speed is low, but she is still able to keep a safe distance from even running Jason's (Parts 2-5) by jogging, which can last long enough for her to reach safety or before having to fight Jason for stamina boosts. She has to be careful if she's forced to sprint more often (e.g. avoiding an attempt Shift-Grab combo by Jason), but jogging can help conserve stamina while keeping her from Jason's reach. When jogging alone against Jason and you need to replenish stamina, use combat stance to lock on directly to Jason (which also turns her to face Jason) in order to prepare for battle at a moment's notice. Using a baseball bat or an axe is a good idea since these weapons have a longer reach than others, and her luck will help improve their durability as well. If you're not able (or willing) to fight him then duck into a nearby cabin instead.

Ultimately, Jenny's true strength is acting as a decoy. It's easier for her to pick up aggro compared to faster counselors; Jason will not chase athletic counselors if he finds slower ones nearby. Her high composure will help stave off the heightened fear penalties involving weakened stamina regeneration as well as increased stumbling, and her luck grants multiple benefits with the most important being improved weapon durability (which allows her to refill some of her stamina multiple times by assaulting Jason).

Try to arm Jenny with high-stun potential weapons; the baseball bat should take precedence above all others. Firearms are another considerable idea, but since the baseball bat won't break easily in her hands, it might be better to hand off firearms to teammates who are terrible at fighting.

With Jenny's bravery, some luck, and a baseball bat to boot, she can survive long enough to make her deserving of being the "Final Girl." Just don't push your luck too far, and do your best to make sure Jason's attention isn't focused on other counselors.

In the Virtual Cabin, she can be found in the first floor bathroom wearing her Spring Break '84 DLC bikini. After Jason breaks out of his display case, Jenny's corpse is in the bathtub with her leg severed.

Jenny wears a striped top, rose colored jeans, and is caucasian with dark brown hair. She represents the "Final Girl" trope, as well as the "Girl Next Door" trope, which by definition is a woman who is easily relatable, well liked, and takes a stand of bravery against the main villain, sometimes even dealing the killing blow. 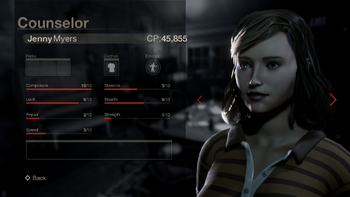 The stats for Jenny Myers.

She has additional clothing packs unlocked from purchasing Downloadable Content.

Jenny’s spring break '84 outfit has a zebra-striped top and bottom. Her bikini reveals her to be a very fit woman in near perfect shape.