Jason (Part 9) is one of the variations of Jason Voorhees featured in the game. This Jason was modeled after his appearance in Jason Goes to Hell: The Final Friday (1993). He can be unlocked at Level 31.

The undead serial killer Jason Voorhees returns to Camp Crystal Lake. An undercover government agent lures Jason into a trap set by the FBI, and several armed men blow him to bits, destroying his body. His remains are sent to a morgue, where a coroner becomes possessed by Jason's spirit after ingesting Jason's putrid heart. Jason, now in the coroner's body, escapes the morgue, leaving a trail of death.

At Crystal Lake, he finds three partying teens. While two of them have sex, Jason kills the third, then the other two. Jason attacks two police officers, killing one and possessing the other. Meanwhile, bounty hunter Creighton Duke discovers only members of Jason's bloodline can truly kill him, and he will return to his normal and near-invincible state if he possesses a member of his family. The only living relatives of Jason are his half-sister Diana Kimble, her daughter Jessica, and Stephanie, the infant daughter of Jessica and Steven Freeman.

Jason makes his way to Diana's house. Steven bursts in and attacks Jason. Diana is killed and Jason escapes. Steven is falsely accused and arrested for Diana's murder, and meets Duke, who reveals Jessica's relation to Jason. Determined to get to Jessica before Jason does, Steven escapes from jail. Jessica is dating tabloid TV reporter Robert Campbell. Steven goes to the Voorhees house to find evidence to convince Jessica but falls through rotten boards. Robert enters the upstairs room and receives a phone call which reveals that he is attempting to "spice up" his show's ratings by putting emphasis on Jason's return from death, having stolen Diana's body from the morgue for this reason. Jason bursts in and transfers his heart into Robert, while the body he left melts. Jason leaves with Steven in pursuit. Jason attempts to be reborn through Jessica but is disrupted by Steven, who hits him and takes Jessica into his car. Steven stalls Jason by running him over. When he tries to explain the situation to Jessica, she disbelieves him and throws him out of the car. Jessica goes to the police station.

Jason arrives at the police station and kills most of the officers. He nearly possesses Jessica before Steven stops him; Jessica realizes Steven is right. In the chaos, Duke makes his escape. Jessica and Steven make their way to the diner to grab the baby. Jason arrives but is attacked by the owners of the shop. He kills the owners but is injured by waitress Vicki, who shoots him with a shotgun then impales him with a iron rod, but then impales her on the same rod before crushing her head, killing her. Jason is presumably killed, and Jessica and Steven discover a note from Duke, telling them that he has the baby and demands that Jessica meet him at the Voorhees house alone.

Jessica meets Duke at the Voorhees house and is given a mystical dagger which she can use to permanently kill Jason. A police officer enters the diner where Robert, possessed, transfers his heart into him. Duke falls through the floor, and Jessica is confronted by Landis and Randy. Landis is killed accidentally with the dagger, and Jessica drops the dagger. Randy, possessed, attempts to be reborn through Stephanie, but Steven arrives and severs his neck with a machete. Jason's heart, which has grown into a demonic infant, crawls out of Randy's neck to Diana's dead body in the basement. Steven and Jessica pull Duke out of the basement as Jason discovers Diana's body and slithers up her vagina, allowing him to be reborn.

While Steven and Jessica attempt to retrieve the dagger, Duke distracts Jason and is killed with a bear hug. Jason turns his attention to Jessica, and Steven tackles Jason, who both fight outside while Jessica retrieves the dagger. Jason badly brutalizes Steven and when he is about to kill him, Jessica stabs Jason in the chest, releasing the souls Jason accumulated over time. Demonic hands burst out of the ground and pull Jason into the depths of Hell. Steven and Jessica reconcile and walk off into the sunrise with their baby. Later a dog unearths Jason's mask while digging in the dirt. Freddy Krueger's gloved hand bursts out of the dirt and pulls Jason's mask into the ground as Freddy's signature laughter is heard.

Thanks to Part 9's Shift strength, he moves much faster and recovers quickly, allowing Part 9 to cover a great bit of distance. With this, he can easily catch running counselors, and can close a large distance gap. The Shift strength is also useful for catching the car as well, as it travels fast and can recover quickly. Additionally, unlike Part 6, this Jason possesses no Morph weakness; therefore, this Jason has more mobility than Part 6 and can easily get around to objectives.

Part 9 Jason also possesses a strength in Stalk. Because of this, he can use Stalk more often, it lasts longer, and recovers much quicker. In this case, this Jason can carefully Stalk and hide from a counselor, and can ambush them from around a corner. Stalk is also useful for catching objectives and effectively catching many counselors.

For objective control, this Jason has difficulties. First, he starts off the game with only three traps, and since traps are not obtainable like Throwing Knives, it can be difficult to prevent counselors from repairing objects like the cars, boats, and phone boxes. Therefore, in order to protect objectives, using Stalk and quickly hunting down counselors is encouraged before they can repair anything.

This Jason also suffers from Lower Hit Points. In this case, Jason will suffer from high damaging weapons and counselors, such as Adam and Brandon, and weapons like the Axe and Machete. Because of his lower hit points, his mask will also be easier to remove, only taking a couple of hits from high-damaging counselors. For this reason, it is recommended to avoid combat with high-strength counselors like Brandon or Adam, as they may only take a couple hits to remove Jason's mask. Additionally, taking enough damage will require Jason to have to Rise, giving counselors more time to run, repair, and find other weapons.

Part 9 Jason also cannot run, but since Part 9 Jason has a better Shift and a decent Morph ability, he should easily be able to catch counselors.

To effectively use this Jason, players should focus more on hunting down counselors individually, and hunting down repair counselors first, as he cannot easily keep objectives under control. It is also encouraged to use Stalk to catch any cars or boats that may be started, as the counselors will be unknowing to your location and they will more than likely drive normally. In a large group, this Jason can prove to be ineffective, but the player should focus more on trying to split up the group and take them by surprise, and force them into disadvantageous positions.

Generally ignoring Part 8 Jason's melting, this Jason wears a tattered and torn dark blue full-body work suit with two chest buttoned flap pockets, a pair of old black work/security boots and a black vertical-buckled work belt. The work suit has several random rips and tatters, with some showing the skeletal ribs on Jason's chest. His skin appears leathery and burned. He wears a ruined hockey mask that is almost completely deformed from the countless damages taken throughout the series; the mask itself appears to be seemingly embedded in his tumorous head. Jason has one eye, the other an empty socket. An axe wound suffered by Jason in the third film is faintly visible on top of his head.

Beneath the hockey mask, most of Jason's face is gone. Faint collections of skin and muscle cover parts of Jason's otherwise completely exposed skull.

In the game, this Jason uses a double-bit axe as a weapon. 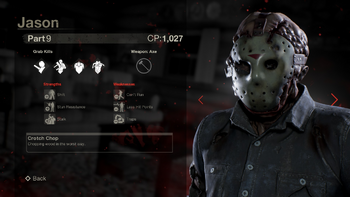 The stats for Part 9 Jason.