Jason (Part 8) is one of the variations of Jason Voorhees featured in the game. This Jason is modeled after his appearance in Friday the 13th Part VIII: Jason Takes Manhattan (1989). He is unlocked upon reaching Level 20.

Sometime after the events of the previous movie (Friday the 13th Part VII: The New Blood), two graduating high school students are aboard a houseboat on Crystal Lake having intercourse, during which Jim tells his girlfriend Suzy the legend of Jason Voorhees. The boat's anchor damages some underwater cables, which shock Jason's corpse; this revives him back to life once more. Meanwhile, Jim plays a prank on Suzy by dressing up with a hockey mask as well as a prop knife, and manages to scare her. But during these events Jason sneaks on board, murdering Jim with a harpoon gun while obtaining the mask Jim wore earlier. He then hunts down Suzy, finds her hiding in a storage bin in front of the ship, and murders her with the same harpoon he used to murder Jim.

The next morning, a large cruise ship called the SS Lazarus is getting ready to set sail for New York City. On board is a graduating senior class from Lakeview High School, chaperoned by the school's biology teacher Dr. Charles McCulloch alongside English teacher Colleen Van Deusen. As the final car makes its way to the docks, McCulloch notices Colleen had brought along McCulloch's niece Rennie for the trip, despite her aquaphobia, hoping Rennie can socialize with the other teens. Although McCulloch argues about seeing his niece aboard the ship, Colleen brushes him off.

During these events, a deck hand aboard the SS Lazarus noticed a boat with bloodstains on its windows approaching the docks, and tries to warn people they're in danger; no one believes him.

Jason manages to sneak on board the ship, and begins a new murder spree. He kills rock star-wannabe J.J. with her guitar before hiding in the bowels of the ship. That night, after a boxing match, a young boxer who lost to champion Julius Gaw is killed when Jason slams a hot sauna rock into his abdomen while Rennie, searching for her pet Border Collie Toby, discovers prom queen Tamara and Eva doing drugs. McCulloch nearly catches them moments later and Tamara pushes Rennie overboard, suspecting she told on them. She then uses video student Wayne to record McCulloch in a compromising situation with her, but rejects Wayne's advances afterward. Tamara is killed by Jason with a shard of broken mirror when she goes to take a shower.

Rennie begins seeing visions of a young Jason throughout the ship, but the others continue to ignore the deckhand's warnings that Jason is aboard. Jason kills Captain Robertson and his first mate. Rennie's boyfriend, Sean, discovers them and tells the others before calling for an emergency stop. Eva is strangled as she tries to flee from Jason. The students agree to search for Jason while McCulloch decides that the deckhand is responsible; however, the deckhand is found with an fire axe slammed into his back. One of the students, Miles, is tossed to his death by Jason and Julius is knocked overboard. Elsewhere in the hold of the ship, Wayne comes upon J.J.'s body and is thrown into an electrical box by Jason; his corpse catches fire and begins a chain of events that causes the ship to sink. With the other students dead, McCulloch, Van Deusen, Rennie, and Sean escape aboard a life raft, and discover Toby and Julius are alive as well.

They row to New York where Jason stalks them through the streets. Rennie is kidnapped by a pair of junkies and the group splits up to find help. Julius tries to fight Jason with his boxing skills, but becomes exhausted after Jason does not go down; he is then decapitated by a single punch from Jason. Rennie escapes from Jason when he kills the punks that kidnapped her. She runs into Sean and they reunite with the teachers and the police before Jason kills the officer who is helping them. Rennie crashes a police car after a vision of Jason distracts her. Van Deusen is incinerated in the car when it explodes, and it is revealed that McCulloch is responsible for Rennie's fear of water, having pushed her into the lake as a child. They leave him behind and Jason kills him by drowning him in a barrel of waste. Jason chases Rennie and Sean into the subway where Sean incapacitates him by knocking him onto the electrical third rail. He is revived again and chases them through Times Square where they try to escape through a diner. They flee into the sewers and encounter a sewer worker. He warns them that the sewers will be flooded with toxic waste at midnight before Jason appears and kills him. Sean gets injured in the process and Rennie draws Jason off, wounding him with a splash of acidic waste that forces him to take off his mask, horrifying Rennie. She and Sean climb the ladder as Jason staggers to get them, but just as he is about to kill them, the sewers flood and engulf him. Rennie sees a final vision of a child-form of Jason as the waste recedes.

The two of them then escape to the street, where they are reunited with Toby who had run away earlier, and walk off into the city.

This Jason is fairly vanilla in terms of stats. Both his strengths plus his weaknesses neither help nor hinder his gameplay greatly, making him a "jack of all trades, master of none" pick for players who want to remain flexible rather than specialize in a certain area (e.g. objective control).

Starting off, this Jason's weaknesses are easily managed. He possesses no weaknesses for either of his teleportation abilities which helps him deal with his inability to run. His weakened Sense ability can still be used briefly to locate points of interest (rather than keeping it on as a radar), and having a weaker grip strength means nothing if the intended victim was armed with a pocket knife to begin with.

On the flip side, two of this Jason's strengths are conditionally useful. His fast swimming speed makes it easy to take down repaired boats as well as patrol waters to traverse the map quickly (depending on the map loadout in question), but since the boat objective will not make a sound when successfully activated, you will have to keep close watch on it and/or use traps to capture any counselor(s) attempting repairs (unless they mess up a repair QTE; the boat propeller makes a unique sound cue in this case). Destruction is somewhat negligible in terms of saving time breaking a barricaded door down if the player decides to use combat stance, but for players who see this tactic as an unintended benefit (or outright cheating), this strength can shave off several seconds. However, once Jason's Rage ability is activated, the usefulness of this strength is greatly diminished either way.

The noticeable strength for this Jason is his heightened Stalk ability. Crafty players will find interesting ways to utilize Stalk in order to catch their prey, and since the cooldown for this ability refreshes quickly due to being strengthened, you'll be able to get the jump on unsuspecting counselors several times in a match. As you continue sabotaging buildings over the course of the game, counselors will be forced to hide in subpar conditions, the worst of them being cabins with no doors left. Stalk can help you silently infiltrate cabins/buildings that cannot be barricaded anymore, making it easier to catch counselors who are placing their survival bets on hiding in a building you've already destroyed.

One interesting way to use Stalk is by getting close to an area where counselors are nearby without alerting your presence; you can listen to any counselor conversation in order to gain useful intel. This also means you'll have more time to refresh the cooldowns on your teleportation abilities (if they're not both ready) before revealing yourself to start the chase. Keep in mind this will also eat up time, giving other counselors the chance to run, hide, or make repairs, all of which are considerable problems if you decide to wait patiently rather than assault counselors on sight.

Overall, this Jason is fairly average across the board. He's able to stop repaired cars using his regular Shift ability, and can maintain decent global objective control. Finally, he doesn't possess any weaknesses to his defense; Kill Jason comps will lack an edge to exploit from this Jason in particular.

In Offline Mode, this Jason is balanced in general gameplay as well as objective control. He can place 3 traps at the objectives as well as adjacent Power Boxes. His Destruction helps get at AI hiding in houses. His weaker Sense is the only real hindrance as high Stealth AI can make it hard to locate them, especially Tommy Jarvis. His Water Speed is also irrelevant due to the boat not spawning in this mode, as waterways are just a means of travel. Stalk is not really needed, but can be used on AI in the right situations.

Jason's appearance is similar to his appearance in Part 7, wearing a very old, worn-out dark olive colored military shirt with two buttoned flap pockets, with matching olive colored military pants and worn-out black colored security boots. He also wears a pair of black leather gloves. His clothes appear to be very damp and waterlogged, and aren't as tattered and ruined as they were in Part 7, although they still have some various tears and rips. Considering in Part 7 Jason's original hockey mask obtained since Part 3 was split apart in two from Tina's telekinetic ability during the climax, Jason now obtains a new hockey mask from one of his victims in the beginning of Part 8. This time, Jason's new hockey mask is yellowish-colored and worn, and presents a top chevron and two lower chevrons (reminiscent of Part 3) facing the opposite direction from each other. Oddly enough, the new mask has the axe cut present with Jason's old mask.

When unmasked, his face is very zombie-like, and resembles a malformed scarecrow; his flesh and skin are grayish-white in terms of color, and is also very slimy, wrinkled, and moldy due to his time being imprisoned underwater. His nose is still missing, with his nose cavity visible like in Parts 6 and 7. As before, Jason's mouth has no lips or skin, exposing his gums and some teeth; some of the inside of his mouth is exposed on the left side of his face, also like in Part 7. There are various cuts and tears that also expose some tissue and bone. 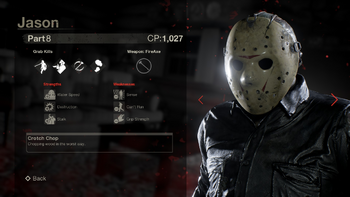 The stats for Part 8 Jason.