Jason (Part 6) is one of the variations of Jason Voorhees featured in the game, and the debut of Jason Voorhees as a supernatural undead entity. This Jason is modeled after his appearance in the movie Friday the 13th Part VI: Jason Lives (1986). He is unlocked upon reaching Level 3.

A year has passed since the events of Friday the 13th Part V: A New Beginning, and Crystal Lake has been renamed to "Forest Green" in the hopes everyone would forget Crystal Lake's bloodied past. Tommy Jarvis, still suffering from hallucinations ever since his past encounter with Jason Voorhees, returns with his friend Allen Hawes to cremate Jason's body, and therefore put Tommy's mind at ease. At the cemetery, they dig up Jason's corpse, but seeing it causes Tommy to snap; he stabs Jason's body with a metal cemetary fence post. As he turns his back on Jason, two lightning bolts strike the post which revives Jason. Tommy, in desperation, throws gasoline to attempt burning Jason, but the same thunderstorm which revived Jason then rains on him, preventing Tommy from lighting up a match. Hawes attacks Jason, but Jason shrugs the attack off with ease, and retaliates by killing Hawes. Tommy, in panic, flees the graveyard.

Eventually Tommy makes his way to the sheriff's office, where his pleas of help are rejected by the town sheriff who knows of Tommy's mental issues. Frustrated, Tommy attempts to grab a shotgun, but is arrested instead on the spot. Back on the road, the head counselors of Camp Forest Green, Darren and Lizbeth, become lost while looking for the camp. They are stopped by Jason standing in the road, who is wearing the hockey mask Tommy had brought along with him as well as wielding the cemetary fence post as a spear. When the couple tries intimidating him by driving up very close to his body, he thrusts the spear into one of the wheels. After being shot repeatedly to no avail, Jason impales them both with his spear.

The next morning, Sheriff Garris' daughter Megan along with her friends Sissy, Cort, and Lizbeth's sister Paula ask him to search for the missing head counselors (Darren and Lizbeth). Tommy warns them about Jason, but since Jason is now considered an urban legend, they ignore the warnings, though Megan becomes attracted to him. In the woods, Jason happens upon a corporate paintball game; he murders the players for their equipment. During the event, Jason discovers he now possesses titanic strength when he rips off a man's arm unintentionally.

Back at Camp Forest Green, the children arrive, forcing the teens to do their best running the camp without the head counselors. Meanwhile, Garris decides to escort Tommy out of his jurisdiction. While driving out of town, Tommy instead makes a detour towards Jason's grave, but finds out the caretaker of the graveyard had covered it up to deny responsibility for it being dug up (Hawes' body was buried in its place). Tommy is then escorted out of town, given one final warning by Sheriff Garris not to return.

That night, Jason murders the caretaker as well as a nearby couple who witnessed the murder. Meanwhile, Cort goes out to have sex with Nikki, but both are murdered by Jason who snuck into the RV after damaging some electrical wires. The sheriff's men find the victims' bodies, and Garris immediately implicates Tommy in the murders, believing he has gone insane trying to warn everyone about Jason.

Tommy attempts to contact Sheriff Garris once more, but instead the phone is picked up by his daughter Megan at the police station. He convinces her to help him lure Jason back into Crystal Lake, believing he found a way to incapacitate Jason in the lake. Tommy decides to accept Megan's offer for a ride, but they are pulled over by Sheriff Garris at gunpoint when they try to evade officers at a roadblock. Despite Megan's alibi, and the fact there was evidence Tommy couldn't be responsible for several of the murders, Sheriff Garris doesn't believe Tommy to be innocent. He arrests Tommy, then goes to the camp to check up on the people there. During this time, Jason has murdered the remaining camp counselors at Camp Forest Green.

While Jason investigates one of the log cabins, he discovers a little girl who is still awake (and also fully aware of Jason's existence from watching his silhouette in the windows). As he leers towards her face, she silently prays to stay calm at the sight of the "scary man." Upon hearing police sirens at the camp entrance, he goes outside, choosing to spare the little girl since he refuses to murder children. Jason then proceeds to hunt down the officers, and despite the little girl wandering outside to warn the officers about him, she can only run away while Jason murders them. Back at the police station, Tommy works with Megan to develop a ruse in order to trick the watching deputy, which allows them to escape.

Tommy manages to reach the camp with Megan, and begins preparing his trap for Jason. Meanwhile, Megan goes to find her friends, but is horrified upon discovering they were all murdered alongside several officers. When Jason arrives to murder her, Sheriff Garris intervenes to save his daughter, now realizing Tommy wasn't lying; Jason was in fact alive, and fully responsible for the murders. Despite getting an upperhand with the element of surprise, and even managing to beat him up for a while, Jason eventually murders him by bending him in half.

As Jason is about to murder Megan, Tommy jeers at him from a boat on the lake. Remembering Tommy was the one who killed him, Jason goes after him instead. Tommy is attacked on the boat in the middle of the lake but manages to tie a chain attached to a boulder around Jason's neck. However, Jason fights back, holding Tommy underwater long enough to drown him when Jason is forced underwater. Megan rushes out to save him, and is nearly murdered when Jason grabs her leg. She manages to activate the boat's motor, then turns it around onto Jason's neck; this successfully puts him down for good. She takes Tommy back to shore and uses CPR to revive him, much to the delight of the now awake children who were watching the entire fight. Tommy, while being embraced by Megan, says it's finally over; Jason is home.

The next day, the lake can be seen, now at peace. But underneath the water, anchored to the bottom of the lake, Jason stares off into the watery distance, awaiting an opportunity to return.

This Jason is a fun option for those who prefer the technical side of him. Starting off with six throwing spikes, he will hold a total of eight when he acquires the two found in his shack. He also possesses a hidden bonus: his weapon has a longer reach than the weapons most Jasons use (roughly 50% longer). This gives him the ability to break down doors using combat stance at unusual angles, making it more difficult for counselors to ambush him at the door's location. Counselors can also be caught off guard in fights should they be unaware of his extended reach.

However, despite these advantages, this Jason does have some early game issues. He cannot run, and since he possesses a weakened Morph ability, it's difficult for him to establish global presence early on until he gains his Shift ability. Although it's best to use Shift for hunting down fleeing counselors, the lowered cooldown means it can be used for travel as well if Morph is on cooldown.

He's well-suited for hunting down counselors in the open. Due to his strengthened Shift ability, counselors won't stand much of a chance outrunning him, and he can hunt them down with precision thanks to his heightened Sense ability. Combined with his heavy arsenal of throwing knives, he can pose a serious threat to counselors who are athletic (e.g. Vanessa). Experienced players, however, will be fully aware of Jason's potential to easily hunt down counselors outside. If you notice a concentration of noise pings, there's a possibility some counselors are planning on ambushing you; coordinated groups will sometimes hide inside buildings where they can limit the effectiveness of Jason's Shift ability. But if you want a perfect-score game, eventually you will have to deal with them. If you can, enter open houses containing counselors with Shift to confuse them of your location and to avoid being flanked while attacking them.

You might want to take note not to swing the spear(or iron post) too often as it might get stuck and take you an extra few seconds to free it. Using combat stance can effectively prevent the spear from getting stuck.

Compared to Part-7 Jason, this Jason is rather harder for beginners to use. Many beginners would be puzzled about his weaker Morph in the beginning of the game. Aiming and properly utilizing a throwing spike can also be hard to master for other beginners. Weaker defense can make beginners controlling this Jason extra vulnerable to high-strength counselors like Adam or Buggzy.

If you're not careful, this particular Jason is vulnerable to Kill Jason comps. First, his primary weakness is his lowered defenses, which makes counselors who excel at fighting like Adam as well as Brandon serious problems if they group up. HIs weakened Morph also makes it difficult to stop female counselors from taking Pamela's sweater whenever she warns Jason, so make sure to place a trap in front of your shack to help deal with this. Unfortunately, if you're forced to use your weakened Morph ability in order to keep an eye on the objectives, there's a good chance players will still be able to get ahold of Pamela's sweater as well as the axe located in the shack.

Ultimately, he excels at hunting down individual counselors, but use your Shift strategically. Get the jump on counselors trying to group up, then pick off the fleeing stragglers. Your heightened Shift ability will make it easier for you to deal with objectives like a repaired car, but nonetheless continue to deny objectives as much as you can. Counselors will take advantage of your weakened Morph ability, either through repairing objectives or trying to kill you.

This Jason variant wears a pale green button-up work shirt (which is stained with blood), a pair of beige work gloves, a pair of weathered khaki-colored work pants, and black work boots. Equipped to his waist is a brown 1940's US Marine utility belt holding a machete sheath, a survival knife sheath, and a slew of throwing knives which he acquired from one of the people competing in a paintball game.

His hockey mask (which he reacquired from Tommy after he fled the graveyard at the beginning) has the axe mark from Part 3 on the top left. This means the hockey mask he wears was the very same one he wore in previous movies. How Tommy managed to keep the mask is unknown. His mask also has a bullet hole above his right eye where Sheriff Garris shot him. While unmasked, Jason's face is heavily decomposed. His browned skin is withering away while his nose cavity is visible. His mouth has been twisted into a grimace from which a set of crooked teeth protrude.

This Jason uses a cemetery fence post, called in-game a "spear," to impale the camp counselors. 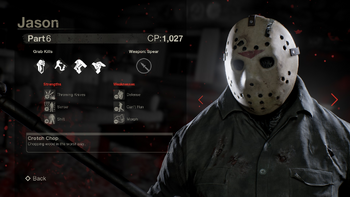 The stats for Part 6 Jason.