Roy Burns (known in-game as Part 5 Jason) is one of the variations of Jason Voorhees featured in Friday the 13th: The Game. He is one of two Jasons unlocked from the beginning, the other being Part 3.

Roy Burns was a paramedic who appeared in the 5th installment of the series (Friday the 13th: A New Beginning). He was also the main antagonist of the film, becoming the first murderer in the series who had no relation to the Voorhees family line.

The paramedic began his mass murder spree after his son, Joey, was hacked to death with an axe by fellow Pinehurst Halfway House resident Victor. Fueled by his anger to exact revenge, Roy adopted Jason Voorhees' appearance to begin murdering everyone in the Pinehurst area, similar to what Pamela Voorhees had done years ago.

After racking up a body count of seventeen, he was finally stopped by Tommy Jarvis chopping his arm off, causing Roy to fall on a set of farm spikes. After his death, his true identity was revealed, along with the reveal he was Joey's biological father.

Roy's strengths make him a well balanced choice for both murdering counselors as well as protecting objectives, something which makes him a suitable candidate for new players.

Due to having Throwing Knives as a strength, he begins the match with six in his inventory, and will hold a total of eight when he picks the two off the wall in his shack. This can help prevent counselors from disarming traps by stepping on them; they will be less inclined to do so if they've taken some damage beforehand, especially if they don't have the Thick Skinned perk. Combined with his average Morph, five traps, and ability to run, he can make life difficult for counselors trying to get the objectives repaired. As a whole, Roy is a great choice if you want to have average stats across the board while also having some fun strengths to spice up gameplay (e.g. improved Stalk ability).

On the flip side, his lowered defense makes it difficult for him to block attacks in combat stance, and since he doesn't recover from stuns as fast as other Jasons it can make combat difficult if he's fighting a gang of counselors. He would much rather murder individuals by using Stalk plus his ability to run in order to get the jump on unsuspecting counselors, therefore it's imperative for Roy to get a strong head start before the counselors can group up. His throwing knives can help soften up people, and eventually the counselors will have to deal with their fear getting the best of them, but Roy is at a disadvantage when he cannot single out counselors.

Imitating the fact that Roy isn't the real Jason, his grip strength is also weakened; this makes it easier for counselors to break out of his grasp if he isn't careful. It's best to have at least one or two grab executions which are performed fast in order to counter this weakness (e.g. Head Punch). You can also cripple counselors by using Roy's many throwing knives as well as slashing them with his weapon in order to ensure the counselor cannot run away with ease.

In the end, this "Jason" thrives on picking off lone counselors, but struggles with groups. The high amount of throwing knives starting off as well as his improved Stalk gives him a calculated, assassin style of gameplay as opposed to the brute force gameplay of the real Jasons. Players who pick Part 5, despite being inexperienced, will be easy prey for coordinated teams looking to kill him, but he can be a menace in the hands of a skilled Jason player.

Roy Burns, when dressed as Jason, has been the center of controversy. While many shots in the movie showed him in dark green coveralls, the lighting in several points of the movie make it appear as if he's wearing blue coveralls instead. It is believed by many he was wearing blue, but some fans have been adamant that the true color is a dark green. Other than that, his appearance closely resembles that of Jason. An update revealed that Gun Media planned to let players switch between the dark green, as well as blue coveralls to reference this point.

He also wore a prosthetic cowl to prevent people from knowing his true identity, and a unique hockey mask with blue chevrons.

While he wielded several weapons in the movie, including Jason's signature machete, he is best known for using garden shears to brutally murder a resident of the Pinehurst Halfway House named Tina (not to be confused with Tina from Part 7). In-game he uses garden shears as his weapon of choice. 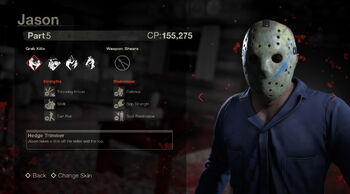