While there are many different means to survive, escaping with a fixed objective is one of the safest choices to make. This means that being able to repair an objective with ease is a valuable skill many teams desire. For Eric, having a maxed repair stat means being able to fix anything he can put his hands on, meaning there is little risk of attracting Jason through a failed-repair attempt. With the help of teammates, Eric should have no problems fixing a means of escape. Surviving the night, however, is another story, one Eric will struggle with in particular.

Although Eric does have high stealth, it's unfortunately not enough to remain silent while jogging; Eric will have to walk or crouch walk to avoid tipping off his location to Jason. Also, his low stamina will cripple his chances of survival--he cannot sprint for long, fighting takes too much effort, and even jogging can whittle down the few actions he can take when Jason shows up. However, do not fear! As a Marathon perk can easily pump his stamina up, going from 2 stamina into a 6 (if the Marathon perk is at maxed, giving a 15% Stamina Increase).

Great caution should be exercised when Eric is on the move by himself since getting caught by Jason while alone is a death sentence; it's recommended that you crouch walk in order to avoid making noise. The first thing Eric should do is find teammates who are willing to protect him. This may not be an issue; Eric is an excellent repair specialist, so teammates will value his contributions to the team, but there's also the fact that he can be used as a sacrificial guinea pig in a crisis due to his low athleticism.

The key to understanding Eric is knowing the kind of teammates who sometimes flock to him: people who are opportunistic. This presents unique pros as well as cons. On the one hand, Eric won't have too much difficulty finding people willing to cooperate with him, but it also means keeping in mind that his group's idea of teamwork might only exist so long as Eric is useful to them.

Eric, however, can turn this to his favor as well. Should he find teammates willing to act as part runners, he can hide safely while others do the dirty work of tracking down parts for him. As a result, Eric is, ironically, just as opportunistic as his "friends." In the end, Eric is dependent on teammates for survival, yet can use his stats to convince teammates they should work for him.

When comparing Eric to Deborah (the only other counselor with a maxed-repair stat), it should be noted that Deborah has slightly better stealth and is slightly faster. Eric's advantage over her is having better luck; his weapon won't break as quickly, and he regains more stamina upon performing actions involved with fighting/escaping Jason. In general, however, both of these counselors should avoid Jason at all costs since they aren't good at running nor fighting to begin with.

Eric should arm himself with firearms if given the chance; this way he can incapacitate Jason from a safe distance. Otherwise, use weapons with high-stun potential; his decent luck will also help him keep using some weapons for an extra swing or two before breaking.

Recruit teammates to get the parts needed for making repairs, then make a grand escape with them in tow. They deserve the ride, after all.

In the Virtual Cabin, he can be found sitting on a couch in the living room, by the fireplace. After Jason breaks out of his display case, Eric's corpse is found slumped over the coffee table with a fireplace poker in his back.

Eric wears medium-sized rectangular glasses, a tan polo shirt, and blue jeans. He has an untamed bowl-cut along with bushy eyebrows; small ears; and a fat neck, lending to an overall stout body shape. As such, he represents the "obese nerd" trope, albeit he isn't as chubby as traditional examples.

He has additional clothing packs unlocked from purchasing Downloadable Content. 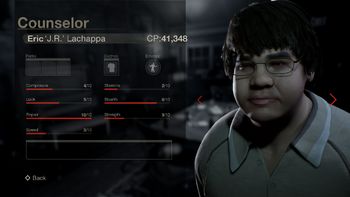 The stats for Eric "J.R." LaChappa.