Brandon "Buggzy" Wilson is one of the Counselors in Friday the 13th: The Game, and is nicknamed "The Jock".[1] He can be unlocked at Level 8.

Brandon "Buggzy" Wilson is the strongest of all the counselors and he has the energy to stick in the fight! With a high Stamina & Strength stat, we have our heavy-hitter of the crew. Brandon plays multiple sports and maintains a high GPA as well. In a well-rounded group, if Buggzy goes down swinging, it's time for you to run for your life![1]

Brandon excels at two things: fighting Jason and running away from him. His maxed-strength stat is one of his defining points, making him a very capable brawler. Combined with high stamina, he's a counselor well suited for fight and flight instead of being forced to choose between the two.

The star jock of the counselors, Buggzy is an excellent solo counselor due to his high stamina and speed. Although his stealth and composure leave much to be desired, it doesn't often matter since Buggzy doesn't need to sneak around to be successful. In fact, it should be a priority to gain attention from Jason.

With his high strength, good stamina and speed stats, Buggzy is great at keeping Jason's attention away from other counselors. With low stealth, he will be easy to find, but his usual game plan will revolve around gaining Jason's attention so that others can get things done, especially since with his low repair, it will near impossible for him to do it by himself.

A great way to use Brandon is as a protector. Grabbing a weapon such as a wrench or a baseball bat, try to help other, slower, repair-oriented counselors to objectives by acting as a bodyguard for them, distracting and leading Jason away while they can make repairs. However, be careful, as the act of being a bodyguard can reveal the position of these counselors to Jason because of the noise you make. It's best to do this when asked or if the objective desperately needs to be repaired.

Be careful when taking on Jason, as even with decent running and fighting stats, Buggzy can be easily grabbed and killed by Jason. It is best to try ambush attacks or jukes in order to waste time effectively.

Since he can inflict a considerable amount of damage on Jason quickly, he's a star choice for team comps who plan on killing Jason. As a result, certain high-damage weapons (e.g. machete or axe) can be useful if he's fighting Jason with a group. Since Jason cannot grab your teammates safely while fighting multiple people (since one of them could easily stun Jason while he's vulnerable), he'll be forced to take you on in combat, giving you a better shot at demasking him. But this also brings great danger to Brandon, so make sure some of your teammates arm themselves with high-stun potential weapons in case something goes wrong. Also, keep in mind that even though Buggzy is strong, he's incapable of stopping Jason forever, so be sure to know your limits and run for safety when you need to.

Due to his unfortunately low luck, weapons with weak durability can break easily; players should search for durable weapons. Firearms are another good choice, but it might be a better option to give them to fellow counselors who aren't very good at fighting. This way, you have more teammates who can protect you if you're in a serious pinch, and Brandon can hold his own in a fight with decent melee weapons.

Never get overconfident--ambush Jason if possible or simply run to avoid danger altogether. With the goal in mind to keep Jason occupied, staying alive is priority. With enough effort, Buggzy can keep Jason busy while the rest of the counselors fix the objectives and allow him a chance to escape. Do note that once Jason gains Rage, most weapons will be useless, so try to get out or switch your strategy to running when the time comes. With enough luck, you can prove that you're the star for a reason and can be a hero when you're needed. Keep those baseball bats handy and swing! Work with your team and try to keep everyone alive. Jason might have the tools to fight you but with a good goal in mind, you can keep him busy for a long time!

In the Virtual Cabin, he and Chad can be found on the second floor overlooking the living room. After Jason breaks out of his display case, Buggzy's headless corpse is found slumped over the railing.

Brandon wears a varsity jacket with the number "26" on his right sleeve; this is likely his given number when playing sports. Since he has a large letter on the front of his jacket complete with images of an American football as well as a basketball, this indicates he played on both the varsity American football team as well as varsity basketball for his high school as a senior (since American high school students normally get their varsity jackets during their final year of high school). Also he is a very muscular guy.

He has additional clothing packs unlocked from purchasing Downloadable Content. 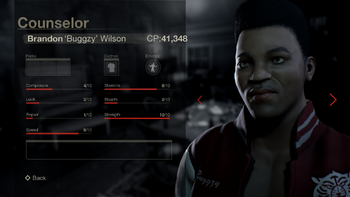 The stats for Brandon "Buggzy" Wilson.