Adam Palomino is one of the Counselors in Friday the 13th: The Game, and is nicknamed "The Edgy Guy". He can be unlocked at Level 14.

He's tough and can fix a vehicle like no other counselor can. We like to think of him as the down-to-earth grease monkey at high school who looks out for others and protects them from bullies. He doesn't take any shit from anyone...[1]

Adam is a unique mixture of finesse as well as combat potential. Thanks to his heightened composure, he can keep his cool even if Jason is around for a while, and can avoid the stamina regeneration as well as stumble penalties that would limit his ability to fight Jason. His overall athleticism, while not the most impressive, does give him some leeway to escape Jason if he happens to be near buildings. And while his repair stat seems unimpressive, it's still more than enough to work with if you have the opportunity to fix an objective when another more capable repair specialist isn't around. Finally, his strength clocks in well above the norm, meaning he's one of a few handful of counselors with the ability to put a serious hurting on Jason.

Altogether, Adam is a "centrist" type of character, especially when compared to Kenny. However, Adam doesn't actually have any weaknesses worth noting. First, any luck below the breakpoint of 6 means baseball bats do not get three hits (instead getting two). Secondly, his below average stamina doesn't mean anything when the Marathon perk exists, and a 15% Marathon can easily make that 4 stamina into an 8; Jason may eventually find you since Adam's stealth is lacking, but Jason will find everyone since the Sense ability exists. In essence, Adam can be treated as a versatile pick, but his stats lean him towards being a counselor capable of both repairing and running while also being decent at demasking. However, since fighting Jason extensively isn't that dangerous in a group, not to mention it only slightly charges his Rage meter faster, Adam therefore requires little to no skill to play.

First, decide on whether or not you plan on killing Jason with your teammates. Since Adam has high strength, he's a great pick for using machetes as well as axes to rip Jason's mask off. But since he has low luck, he doesn't favor lengthy fights even with his decent composure if his weapon breaks too quickly. Instead, he does a better job in a group where he can get free hits (and free damage) on Jason if he decides to grab any fellow counselors. No matter the counselor, it is best to stay in pairs against Jason should anyone get grabbed by him, they can just be freed with the swing of a weapon.

Adam is one of the better repair counselors that can go solo, the others being Fox and Kenny Riedell.

Alternatively, Adam serves well as a guardian when protecting objectives. Jason will often use his Morph ability to keep an eye on areas of interest when he can't find anybody through noise, meaning Adam can use his low stealth as a tool. If you need to draw attention away from your teammates, you can start sprinting instead of jogging to make detectable white pings on Jason's HUD, giving a slight chance of attracting his attention away from teammates who need to make critical repairs. Otherwise, jog to conserve stamina or sprint just to get to different points on the map. Adam's decent composure will help keep you from giving into fear quickly, but you need to make sure you have an escape route planned out since his stamina will wear down eventually.

For weapons, Adam should decide on either strength-based weapons to demask Jason or using weapons with high stun. Give any firearms you find to teammates who have weak combat potential so they can back you up in a heartbeat should you run into problems later against Jason.

Evaluate the situation, then decide the best way to protect both your teammates as well as yourself.

Outside the Virtual Cabin, he and A.J. can be found sitting by the fire. After Jason is resurrected, Adam's corpse is found by the fire.

Adam Palomino wears a leather jacket decorated with pins, a plain t-shirt, denim jeans, and high top sneakers. He appears to be the most muscular male counselor in the game.

He has additional cosmetics unlocked from purchasing Downloadable Content. 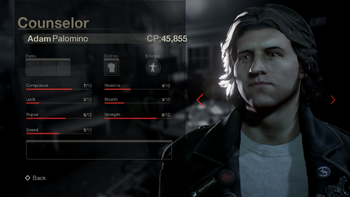 The stats for Adam Palomino.