A.J. Mason is one of the Counselors in Friday the 13th: The Game, and is nicknamed "The Rocker Chick".[1] She is unlocked at Level 4.

She's a tough as nails rocker who doesn't take shit from anyone. Her high-Composure stat makes her perfect for maintaining her cool when Jason shows up and starts murdering counselors. She's able to slink around, hide to survive, with a high-Stealth stat as well.[1]

A.J. Mason is one of the best counselors to pick if you wish to hide from Jason. Her maxed stealth makes it difficult for Jason to find her since she will only make noise if she sprints, moves through water, or attempts to move while out of stamina. In fact, for the first forty-five seconds of the game, Jason will only find her through direct visual contact; this grants her a small window of opportunity starting off. As a bonus, she's a capable fixer thanks to her above average repair stat.

However, her lack of strength makes it difficult to fight Jason, and her terrible luck means a fragile weapon like the baseball bat will break fast. Her below average speed as well as stamina will also present a difficult challenge when trying to outrun Jason in the open. And while her above average composure does help keep her from panicking, her abysmal luck will make her stumble often when she does reach high levels of fear. In short, her weak athleticism as well as low fighting potential makes survival difficult if Jason discovers her. However, there are ways to get around her low strength, luck, and athleticism if you have the right perks equipped. Sucker Punch, Marathon, and Man At Arms are very useful perks as Sucker Punch increases her chances of stunning Jason, Marathon increases overall stamina so A.J. won't tire out easily, and Man At Arms helps her overcome her unlucky nature in regards to weapon durability. These perks are ideal for A.J., as they make combat and running easier for her.

A.J. is best suited as a "lone wolf" in terms of gameplay. Since Jason can Sense her if she's within his detection range, she's better suited towards fixing objectives he isn't watching. Experienced Jasons will Morph between the four-seater car as well as the phone box to prevent large masses of counselors from escaping, so A.J.'s best bet for survival is fixing lesser objectives such as the two-seater car or the boat (depending on which one spawns on the map). By staying far away from hot spots that Jason visits often and taking great care not to make noise that would draw his attention, she can repair a means to escape in secrecy.

If you really want to stick together with people as a counselor skilled in repairing objectives, then choose Deborah or Eric. Both of these counselors have maxed-repair stats, and both are better at fighting Jason off (not to a great extent, yet they have better luck than A.J. in comparison). But if you end up working with a large group of counselors then decide what you're going to repair; the parts A.J. looted could be used to fix a major team objective like the four-seater car. It does help having at least one person on the team who cannot be found with ease for a good chunk of the game, and being a capable fixer who can work fast before Jason shows up is something to consider. Having a walkie at hand will help keep her in communication with other counselors and should you find a promising lead, it might be better to abandon your original objective if it means helping more people (and yourself) escape.

When you choose A.J., watch for anyone who picks the counselor Tiffany. She is the only other counselor in the game who has maxed stealth and because she's athletic, you can work with her to get a lesser objective fixed. A.J. should make repairs using the parts Tiffany delivers, and as long as neither counselor makes noise or fails a repair, the two can make a grand escape.

Despite A.J.'s sneaky nature, she doesn't fare well in the later stages of the game; this is due to Jason's Rage ability. At this point, he will be able to Sense you from long distances and even hiding spots will reveal her. Since A.J.'s means for survival is staying hidden, her chances of survival will become very difficult. It's recommended that you escape using a repaired objective, but there's also strength in numbers if all else fails... so long as the group is armed with decent weapons (which becomes more unlikely as time goes on).

For weapon choices, A.J. should use firearms because they overcome her weak-combat potential and can stop Jason cold in his tracks from a safe distance. Otherwise, use durable weapons with high-stun potential to make up for her abysmal luck (e.g. wrench).

Calmly observe your situation, then decide if it's worth surviving with friends or by yourself. Since A.J. has strong roaming potential, she should be able to find a myriad of useful items/weapons while staying hidden. It's up to you whether that means helping people, or abandoning them to their fate.

Outside the Virtual Cabin, she and Adam can be found sitting by the fire. After Jason is resurrected, A.J.'s corpse is found by the fire with her arm severed by an axe.

A.J. Mason represents the rebellious "Rocker Chick" trope; she dresses in an alternative punk rock fashion, complete with pink-colored bangs in her hair. Her clothing consists of a black tank top with a black bra underneath along with a gray skirt and purple and black striped leggings. She is a tall girl with pale skin, green eyes, red lips, and a beauty mark on her left cheek.

Her Spring Break '84 clothing pack is an open back one piece swimsuit.

Her Halloween clothing pack is a cheap skeleton costume.

(Note: both are only unlocked from purchasing Downloadable Content.) 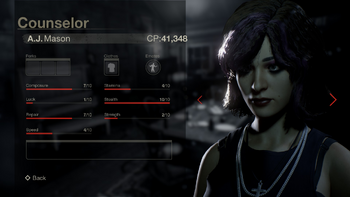 The stats for A.J. Mason.

A.J. Has the most unique standing animation of any counselor.